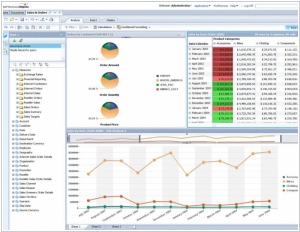 Empower your people with easy access to the business intelligence (BI) and data visualization tools solutions they need to make faster, more informed decisions. Our BI platform and software can boost your organization’s collective IQ by giving all users the information necessary to drive smarter processes, improve performance, and become more effective in everything they do.
26
Tableau

Tableau complements your natural ability to understand data visually. Our breakthrough products let you create rich analyses and share your insights with colleagues in seconds. Connect and visualize your data in minutes. Tableau is 10 to 100x faster than existing solutions. From spreadsheets to databases to Hadoop to cloud services, explore any data with Tableau.
SAP Business Objects vs Tableau in our news: