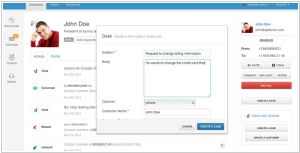 World’s Leading Browser-based Call Center Software. Create a Call Center in 5 Minutes. One-click integrations with Salesforce, Zendesk, Desk.com and many others. No phones, hardware, downloads or coding required.
RingCentral vs Talkdesk in our news: Talkdesk, the provider of cloud-based contact center software, has raised $100 million in new funding. The round values the company at north of $1 billion. The company, which uses artificial intelligence and machine learning to improve customer service, targets mid-market and enterprise businesses, counting IBM, Dropbox, Stitch Fix and Farfetch as customers. With Talkdesk companies with millions customers can allow each customer to connect with a company in the best way possible. Having received a call customer service agent can see what products the cutomer bought, what her tastes are, what she has complained about before. Talkdesk, which creates software that helps companies create virtual call centers has raised $15 million. Companies use Talkdesk to create centers where customers can call into in order for assistance and feedback. Those calls are connected to internal company databases like Salesforce and Zendesk, which bring up all the relevant information about a caller in order to help a customer service representative better resolve the issue or route that customer to the best person. For example, when someone calls customer service and the call is routed through Talkdesk, the software automatically puts information about the caller in front of the customer service representative. Examples of that would be order details, how much that person usually spends, their name, or other bits of information that are useful to representatives that help them more quickly resolve an issue.

2007 - RingCentral allows to manage your calls, save money with VoIP