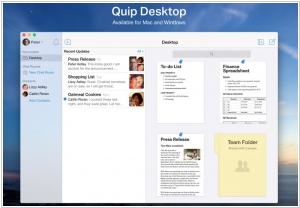 With Chatter, it’s easy to work together and know everything that’s happening in your company. Updates on people, groups, documents, and your application data come straight to you in real-time feeds. It's better than alternative solutions for Salesforce users.
Quip vs Salesforce Chatter in our news:
2016. Salesforce buys collaborative word processing app Quip Salesforce is acquiring Quip, the cloud-based word processing app for $750 million. Quip will continue to operate its business, but now under Salesforce. Quip, when it first launched as a mobile-only native app (it now has a desktop and web version), was described as a timely disruptor to the clumsy and very incumbent Microsoft Word. Salesforce could do enough just to offer this, as it is, as part of its wider portfolio of productivity services to tempt more customers to its platform, and away from Microsoft’s. But considering the price that it is paying, and the fact that the Quip team is joining as part of the deal, I suspect they could be aiming to do something even bigger. Though Salesforce announced free Chatter back in November 2010 and it was officially launched on Feb. 1, 2011, we specifically waited for today when the joint project of Salesforce and Black Eyed Peas has been unveiled. It is a cool example of the beautiful marketing, that becomes an integral part of Enterprise 2.0. To be successful in today's economy every IT business needs to attract attention and, therefore, should become a show business. No one is very excited about the news like "Salesforce partnered with Dell". But the news "Salesforce partnered with Black Eyed Peas" - really attracts attention of potential customers. Nobody wants to look at how Marc Benioff talks about Chatter advantages, but it's very interesting to at him dancing to the Will.I.Am's bit: