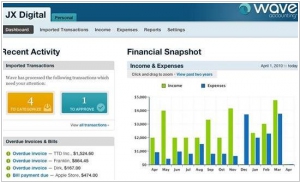 Half a million customers use Wave's online small business software to do their invoicing, accounting and payroll. Smart cloud apps for smart business owners. Wave makes it easy to be your own boss. Just do what you're good at, and lean on Wave's smart online software for help with invoicing, accounting and payroll.
QuickBooks vs Wave in our news:
2017. Intuit acquired time-tracker TSheets