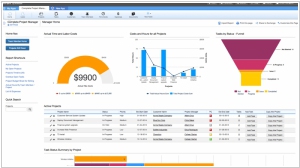 Smartsheet is an online project management and crowdsourcing tool. It allows owners of information to comprehensively involve contributors through authenticated access, publicly-accessible published sheets, or via embeddable survey forms. Functionality is focused on the ability to organize, share, and update tasks and files.
QuickBase vs Smartsheet in our news:

Smartsheet.com, a collaborative work management company, today
introduced the Smartsheet Small Business Bundler. The offering makes it
possible for small businesses to create an online variation of their
services using Smartsheet, requiring no technical expertise and no
setup costs.

The Small Business Bundler provides organizations with the means to
offer a branded work management tool as part of their own online
service pre-loaded with their expertise for clients. It is perfect for
those looking to differentiate how they deliver and monetize expertise
to clients, professional networks, virtual teams and membership groups.
Small businesses can distribute their solutions to an unlimited number
of people, and generate subscription revenue on top of their services
fees.

"Small businesses (agents, brokers, consultants, recruiters, virtual
assistants) are looking for online tools to enhance their own
productivity. And in the current economic climate it is more important
than ever for teams to work efficiently," said Mark Mader, CEO of
Smartsheet.com. "They are also looking for small business tools that
will differentiate them with their clients, by presenting a superior
approach and online service aligned with their skills. We've designed
Smartsheet to carry their expertise and brand directly to their
customers, thereby giving them the credit and business benefit of a
professional interface with their clients."

Smartsheet is launching with its first 15 small business partners, three of which are:


Virtual Assistant Network - A virtual assistant resource site with more than 10,000 members. Tradeshow Coach - Tools for tradeshow organizers and exhibitors as well as marketing event planners. Success Connections - An organization aimed at helping entrepreneurs succeed. "Smartsheet
has been a lifesaver for us," said Tawnya Sutherland, the
Vancouver-based entrepreneur who runs Virtual Assistant Network, which
supports over 10,000 virtual assistants. "Our job is to offer virtual
assistants the resources they need to do their jobs. Smartsheet allows
virtual assistants to manage every aspect of the client relationship
and give clients direct access to pending and completed requests."

Back in July when I originally covered the beta of Smartsheet
Task Manager and Project Collaboration service, I had some reservations
about adopting it. While I thought it was a strong app, I also believed
it was lacking some of the core features I would need. With their official launch of V2 today, I wanted to give it another
look to see how things have changed since I last looked. I also had an
opportunity to chat about Smartsheet with founder and chairman Brent
Frei who shared with me some of the design philosophy behind the
service and productivity in general.

According to Frei, Smartsheet is built upon 5 Foundational
characteristics that define and guide the user experience, and where in
the process most applications fail. From the initial first impressions
through to company wide adoption, Frei claims that Smartsheet is
designed to address the needs of real users through each of these
phases.
One of the most intriguing of these 5 Foundations to me is their “No
Adoption Required” philosophy. If you have ever tried to incorporate a
project management tool into a team or collaborative environment, you
understand the challenges of trying to get everyone on board. Whatever
the case for the resistance, the tool ceases to be effective if the
team doesn’t use it. Smartsheet and the “No Adoption Required”
philosophy tries to combat this by enabling folks to be a contributor
without needing to ever create an account or log in.

Acknowledging that email is still the primary communication tool in
most organizations, Smartsheet has really beefed up notification and
participation options through email. Using live secure links, users can
access the area of the project that is relevant to them and incorporate
their updates directly in to the Smartsheet system. These live links
are also used for access to attached files.
I really can’t stress how easy and seamlessly this is done. Say I
need a status update from a particular user on the line items he is
responsible for, I can send them a quick update request link to just
those items. They can add updates or comments, change task status, add
files etc…

Reporting
options will allow these status update emails to be scheduled and
automated making it really easy to create a nice consistent workflow
process.
File attachments and threaded discussions can also be affiliated with each line item task which is really handy.
Another really thoughtful feature is full change management and
recording. Track who completed what and when and highlight the changes
over a particular time period.
Options for branding and customization are also nice and can be
adjusted for each organization you work with. A new branded
distribution program adds customized templates and workflow along with
revenue sharing.
All together these improvements and refinements, along with some
upcoming reporting options, make Smartsheet a much more compelling
option for project and task management than it was when I reviewed them
in beta. It is simple to use, easy to access, and affordable.
Even though I’m still not convinced the spreadsheet metaphor is the
right one for me, there is a certain comfort and familiarity to
Smartsheet that makes it easy to just jump in and start working.
Pricing for Smartsheet
starts with a free 2 sheet Starter Account with additional sheets and
reporting options available for the higher account levels. I really
like that they don’t limit users with any of the accounts. I believe
pricing models like that tend to inhibit the desire to bring folks on
board. Smartsheet allows you to share with an unlimited number of
people with any plan.

In my ongoing and seemingly never-ending pursuit to find the perfect Project Management solution, I recently put the smartsheet service through its paces to see how it would fit the bill. Billing itself as an Online Project Collaboration tool, it features
a familiar spreadsheet-like interface as its data presentation method,
which should make a lot of folks feel right at home.

Unfortunately, I was able to disqualify smartsheet from contention
for my purposes pretty quickly. There is a certain minimum level of
functionality that I would think is required for a project management
tool and as of right now Smartsheet just doesn’t fit the bill. I kept
waiting for an Aha! moment when things would just click or I would
discover the hidden menu items to access the project management
functionality.
Smartsheet functionality like integrated file uploading and
discussions (coming soon) are indeed upgrades to a traditional
spreadsheet, but fall short of the consolidated messaging, task and
deadline tracking that I would expect to find in a project management
application. For example, there doesn’t seem to be a way to view all
tasks assigned to me across all of my project sheets.
I think the flaw is that for me a spreadsheet is inherently the
wrong vehicle for project management and building on enhanced
functionality isn’t going to change that, no matter how well it’s done.
Smartsheet isn’t a bad application, and if you insist on using a
spreadsheet for this purpose it can be a worthy upgrade. My
recommendation though would be to also investigate one of the other
project management solutions available that we have covered like
Basecamp, DeskAway, or Joint Contact before making any decision.
Smartsheet Version 2 is currently in Beta and is an update to their existing Classic service. Free beta accounts are currently available while post launch pricing is not yet available.