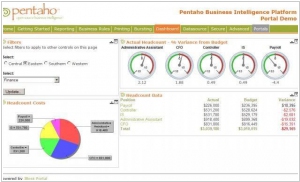 Tableau complements your natural ability to understand data visually. Our breakthrough products let you create rich analyses and share your insights with colleagues in seconds. Connect and visualize your data in minutes. Tableau is 10 to 100x faster than existing solutions. From spreadsheets to databases to Hadoop to cloud services, explore any data with Tableau.
Pentaho vs Tableau in our news:
2019. Salesforce acquires data visualization company Tableau for $15.7B

Hitachi wants to add big data analytics capabilities to its portfolio by acquiring BI vendor Pentaho. Pentaho is best known for its big data platform that simplifies preparing and blending all types of data and includes a spectrum of tools that enable users to easily analyze, visualize, explore, report insights and predict outcomes. Though Pentaho is expected to operate as a somewhat independent entity and to continue serving its large customer base, it will also leverage Hitachi’s deep pockets and resources to accelerate our big data analytics and data orchestration capabilities, bring new innovations to market, and expand support for current and future customers.