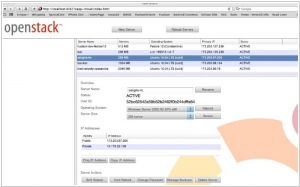 OpenStack is a global collaboration of developers and cloud computing technologists producing the ubiquitous open source cloud computing platform for public and private clouds. The project aims to deliver solutions for all types of clouds by being simple to implement, massively scalable, and feature rich. The technology consists of a series of interrelated projects delivering various components for a cloud infrastructure solution.
16
VMware vSphere 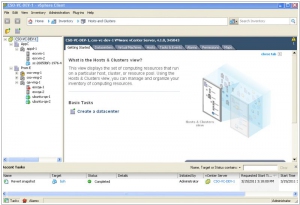 Build your own cloud infrastructure in your datacenter and remote sites on VMware vSphere the world’s leading server virtualization platform. Virtualize your x86 server resources and aggregate them into logical pools for allocation of multiple workloads. Get network services optimized for the virtual environment, along with simplified administration and management. Reduce the complexity of back-end storage systems and enable the most efficient storage utilization in cloud infrastructures.
OpenStack vs VMware vSphere in our news:
2016. Rackspace offers ready-to-use Openstack private clouds 
2012. OpenStack - is like the Soviet Union. Who develops OpenStack? Last week, RackSpace has launched the open platform OpenStack in its cloud. And though HP has done the same a little earlier, but in HP Cloud OpenStack is running in beta mode, but in RackSpace Cloud - anyone already can start using OpenStack for business needs. So now all these debates what is more cool, Amazon Web Services or OpenStack will go into practical area. And the last theoretical debates took place shortly before the launch at the GiGaOm Structure conference. And at this conference, Chris Kemp, CEO of cloud provider Nebula (which, by the way, is OpenStack member) compared OpenStack with Soviet Union - "a collective farm ostensibly run for the good of its members, but where nothing is actually accomplished." Why Chris Kemp said that? Let's take a look, who develops OpenStack: 
2012. Amazon - gets closer to Windows, OpenStack - closer to Linux

The situation on the cloud (IaaS) platform market more and more reminds us the history of the desktop operating systems (Windows and Linux). On the one hand - open and standard-based platform OpenStack. It's standards this week were supported by two more giants - IBM and Ericsson, that joined the OpenStack alliance. Before them the alliance included Rackspace, Citrix, Intel, AMD, Cisco, Dell, HP. On the other hand - proprietary but already very popular platform Amazon Web Services (AWS). AWS gained it's popularity as a simple and open platform which allows to restore Linux or Windows server and scale it depending on the load. It was relatively easy to move applications of AWS. But as Amazon adds new features to AWS, it lockes clients and partners more and more in its golden cage. It seems that OpenStack, the open-source IaaS platform led by Rackspace, has really become the Linux of the Cloud Computing era. The two cloud hardware giants - HP and Dell - has recently joined the alliance. HP joined on paper and Dell - are already in practice. Yesterday Dell unveiled the solution for building private and public clouds Dell OpenStack Cloud. From the title it's clear on what software platform it is built. Recall that the OpenStack alliance already includes the chip makers Intel and AMD, virtualization giant Citrix, networking giant Cisco, cloud management developers Cloudkick and Rightscale, cloud providers Rackspace and Cloud.com. Each of these companies contributes to the OpenStack development, making it ideally compatible with the hardware, networking equipment and intermediate software. On the other side of the market there are Oracle, IBM, VMWare and Amazon, offering their proprietary cloud solutions. But it will be hard for them to play against such a powerful alliance.