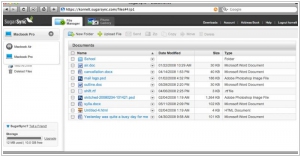 SugarSync makes it easy to backup, share and access your files, anytime, anywhere. With SugarSync you get online cloud storage for all your files — documents, music, photos, and video. When you make a change or add files on any of your PC or Mac computers, SugarSync automatically syncs your files to the cloud, where you can access them from any Internet-connected device — including your smartphone or iPad.
OneDrive vs SugarSync in our news:
2018. Microsoft added AI transcription to OneDrive and SharePoint