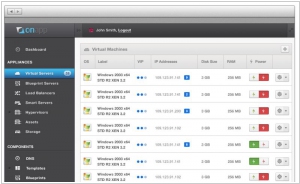 OnApp software enables Infrastructure-as-a-Service for hosts, telcos and other service providers. With OnApp in your datacenter you can use commodity hardware to sell public & private cloud services, dedicated servers, Virtual Private Servers, CDN, DNS, storage and much more, through one fully automated control panel.
10
VMware vCloud 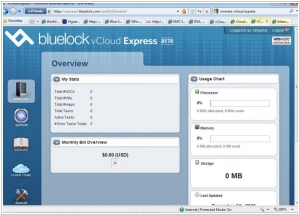 London-based Cloud automation company OnApp has bought SolusVM, the virtual private server management system, in order to boost demand for the capacity on offer in OnApp’s federation. OnApp provides a marketplace of content delivery network (CDN), storage and compute capacity. And SolusVM is used by thousands of small service providers to manage their virtual private servers (VPS). OnApp wants those outfits to boost the demand side on its marketplace. The idea is for SolusVM users to see, alongside the option of adding another hypervisor, the option of “simply buying resources you need from the OnApp suppliers, then supplying to your customers a mix of your own infrastructure and excess infrastructure. Businesses for a long time have been implementing virtualization technologies in their data centers to reduce IT costs, increase its flexibility and reliability. So, now it is much easier for them to transfer their virtualized IT infrastructure to private or public clouds powered by VMWare, than to the Amazon cloud, or even to Windows Azure. VMWare provides vSphere platform for private clouds and vCloud - for public clouds (vCloud is delivered by several VMWare partners, including Salesforce). Recently the company also released a vCloud Director, which allows companies to easily manage their IT infrastructure, which can be distributed among several private and public clouds, running on these platforms.

Also, VMWare has acquired MyOneLogin, the service which enables companies to implement a unified user authentication system for cloud environment where different applications run on different clouds. This reminds the Active Directory service in Windows. And in order to control the cloud application development process, VMWare has released VMware vFabric - the Java IDE for cloud applications. vFabric is based on SpringSource framework that VMware acquired last year, and includes the tools to build applications optimized for VMWare cloud platforms. Like VMForce, Google App Engine for Business utilizes VMWare's technology. However, in this case Google and VMware partnership is less about them working together. Just Google added support for VMWare's Spring framework to its Google Web Toolkit. In result any Java-application developed on Spring can be quickly moved from in-house server to the GAE cloud. Besides, it can be quickly moved from GAE to another provider, that supports VMWare's vCloud (in particular, VMForce). In addition, thanks to Spring widgets, any Java-application on GAE can be easily adapted to any mobile device with a browser.

Existing Java-applications can now be ported from the local server to Force.com without any adoption. And besides all these tools for deploying Java-apps in the cloud, the developers get access to a vast customer base of Salesforce. They can develop independent cloud applications or Java-addons for Salesforce CRM.

Until now, developers couldn't create Java-applications on Force.com. Taking into account the huge Java popularity in the enterprise, VMForce.com will become the significant advantage for the cloud market leader. Recently Salesforce also launched the similar project to integrate the development environment Adobe Flash + AIR to Force.com.

Pricing for VMforce has not been established yet, and the offering will be available for a developer preview later in the year.