Support enterprise-wide identity management across any app, user or device with Okta - a future-proof cloud service designed for maximum ROI & ease of use. A secure, reliable cloud service for today’s hybrid IT reality. Comprehensive Identity Management that has no alternatives. Across All Apps, Users and Devices. Easy-to-use, Superior ROI. Integrated, Future Proof
10
OneLogin 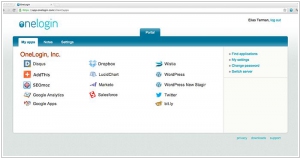 OneLogin provides the fastest path to identity management in the cloud with an on-demand solution consisting of single sign-on, multi-factor authentication, directory integration, user provisioning and a catalog with thousands of pre-integrated applications.
Okta vs OneLogin in our news:

2017 - OneLogin brings some smarts to multi-factor authentication. Okta is in panic Multi-factor authentication service OneLogin rolled out a new version of its mobile app that uses machine learning to determine your typical usage patterns and only asks you for a second factor when it determines that it’s absolutely necessary. Most MFA algorithms are rather rigid. If you’re on the network at work, you get asked for a password. If you’re not, you get asked for a second factor, but he says, it should be much more subtle than that, understanding how users access the network. The latest version of OneLogin OTP is designed to fix that. If you log in regularly from your home on the same laptop, after several times the system will learn that this is a common location and device, and you will be allowed onto the network without a second factor. Cloud identity management provider OneLogin has acquired Sphere Secure Workspace to add mobile device management to their identity-driven security model. Sphere provides a container approach to mobile security where your work content is separated from your personal content inside a virtual container on a single device. This is not a new approach by any means, but it gives OneLogin entree into the light-weight mobile device management space. With Sphere, the company simply blows away the container when an employee leaves a company or loses a device, and the person’s other content remains intact. It gives the employee access to work content in a more secure way with a single log-in, while protecting the personal content.