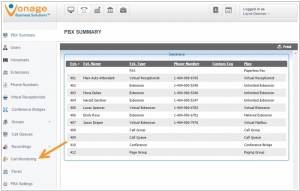 Vonage is a commercial voice over IP (VoIP) network and SIP company that provides telephone service via a broadband connection. If you’re looking for an ultra-basic phone system with standard VoIP features, you’ll be happy to know that each of Vonage Business Solutions small business phone solutions come loaded with dozens of standard and alternative features. We also offer plenty of other advanced features at no extra charge, but if you’re just looking for a phone solution with a reliable dial tone and some business-class applications, we’ve got you covered.
Nextiva vs Vonage in our news:
2021. Ericsson to acquire cloud communications company Vonage for $6.2B Ericsson, an international networking company, decided it needed a dose of modernization and acquired cloud communications company Vonage in a $6.2 billion deal. With Vonage, Ericsson is getting a more modern approach to communications that includes a cloud contact center, communications APIs (like Twilio’s) and a voice over internet protocol (VoIP) solution. The company believes that it can build on its 4G and 5G networking technology by taking advantage of the key pieces of the Vonage family. Specifically, Ericsson is focused on Vonage’s communications APIs, which it believes will enable it to tap into a network of developers across the world building applications based on 4G and 5G technology. Internet phone service provider Vonage is the latest among a slew of leading Net telephony companies to cut prices in a battle for customers. Vonage, which is among the largest and most recognized providers of a technology known as voice over Internet Protocol (VoIP), on Monday slashed the price of monthly unlimited North American dialing from $35 to $30. The carrier's new monthly price puts its subscription rate on par with what's become the industry standard cost for Net phone call plans, made cheaper because they use the unregulated Net rather than the phone companies' highly regulated and taxed networks. Vonage's price cuts are likely to force smaller players into further dropping prices on calls to differentiate themselves. But Holder said Vonage won't likely change prices again, until it has the 450,000 subscribers it expects to reach sometime in the fall of 2005.