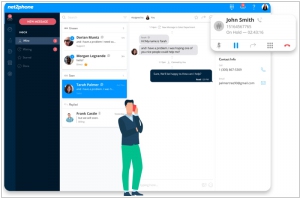 net2phone's world-class phone system keeps your business running in and out of the office.
36
RingCentral