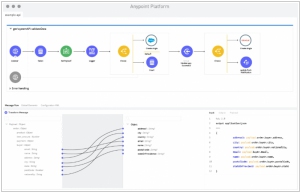 One platform for APIs and integrations. Build an application network with secure, reusable integrations and APIs designed, built, and managed on Anypoint Platform.
15
Workato

A single platform that automates work and powers innovation across your business. Better Integrations Through Intelligent Automation
MuleSoft vs Workato in our news:
2021. Salesforce announces new Mulesoft RPA tool based on Servicetrace acquisition