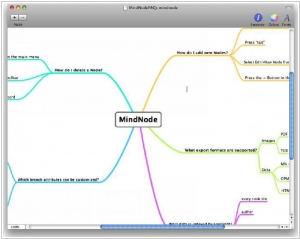 MindNode makes mind mapping easy. Mind maps are a visual representation of your ideas, starting with a central thought and growing from there. This allows you to brainstorm & organize your thoughts in an intuitive way, so you can focus on the idea behind it.
10
NovaMind 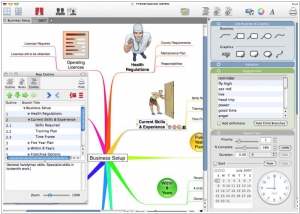 Backed by 14 years of Mind Mapping software development, NovaMind is built from the ground up to help you brainstorm, collect and organize ideas, develop and implement plans, and communicate them to others.
MindNode vs NovaMind in our news: IdeasOnCanvas presented the new version of its mind-mapping software MindNode 5 is coming soon this year for iOS and macOS. MindNode 5 is an update packed with new features, enhancements and many small refinements to make working with MindNode even more productive. Top-Down-Layout and orthogonal branches will enable you to use MindNode for new use cases, like organization charts. Other new features include a brand new brainstorming mode and the adoption of many significant iOS 11 features. The free version doubles as a viewer for MindNode documents. If you only want to edit your documents on your Mac, but want to view them on you iPhone you can now do this without paying for the iOS version. The conclusion is that MindNode is now more functional if compared vs iThoughts Users of mind-mapping app MindNode for iOS know that you have the option to import documents from Dropbox or iCloud directly through our app’s Document Picker. This has always been limited to just MindNode documents. Dropbox has decided to deprecate their old API and MindMode developers took the chance to revamp Import for MindNode and it now lets you easily import all formats from any cloud storage you have on your iOS device, right there in the Document Picker. A pre-requisite for importing on iOS is that you install the iOS app of your preferred cloud service. Thus MindNode gets more iOS-friendly than XMind Mind-mapping app MindNode for Mac, iOS and Apple Watch just got many new features and enhancements. Using MindNode for Mac you can now send your task directly to Cultured Code’s Things. Just select “Export to Things” from the share menu and all your tasks will be exported to a new Things project. MindNode also integrates with OmniGroup’s OmniFocus and allows to import and export TaskPaper documents. The developers also improved MindManager and OPML import/export to fully support tasks. Another major focus area of this release is Accessibility support. Now you can navigate the app with VoiceOver, bold text, reduced transparency and reduced motion enabled. Thus MindNode is now more productive in comparison to iMindMap Mind-mapping tool MindNode released updates for our Mac and iOS apps. The major new feature in this release is the new Task support. You can turn any child node into a task and check off completed tasks directly on the canvas. To help you stay on top of your tasks, MindNode will also show a task progress indicator on parent nodes that have children with tasks. If you prefer Apple Reminders to manage your tasks, you can also share your Tasks to Reminders and MindNode will keep the completion state in sync with Reminders. For example when you mark a task as completed in Reminders, it will also be marked as completed in MindNode. So we may assume that MindNode becomes more functional if compared vs Mindly Mind-mapper MindNode released updates for our Mac and iOS apps. The update adds two new free sticker sets – Organize & Productivity. You can now choose from 75 (100 if you add the MindNode Pro add-on) stickers exclusively designed for MindNode, all available in colored and tinted variants. A better AppleScript integration allows to write scripts to batch export document to all available export formats. Other improvements related to El Capitanare improved Split Screen mode, new Haptic Feedback when reconnecting and added swipe to delete in outline view. MindNode will now also search connection label titles directly on the canvas and note contents in outline view. Furthermore MindNode fully adopts iOS multitatsking and makes brainstorming and researching topics even easier than before.. So MindNode is now more functional than MindMeister Mind-mapping app MindNode is now available for Apple Watch. You can view your recent documents directly on your wirst. MindNode for Apple Watch allows you to browse your documents as a text outline and view attached images and notes. Other new MindNode features include Notes, Stickers, Connection Labels, new content inspector that allows to add shapes, borders and strokes to your nodes, better manual layout and new Smart Layout options, Personal Theme that makes it easier to create your personal style, new custom user interface font. The conclusion is that MindNode becomes more mobile than NovaMind

2015 - MindNode 2.0 adds notes and stickers to take on MindJet MindManager More than seven years after the initial MindNode 1.0 release, IdeasOnCanvas is finally shipping the brand new MindNode 2.0 for Mac. One of the biggest new additions to MindNode is the new notes feature. You can now add text to any node without cluttering the canvas with too much text. Notes are a good way to collect additional information and links. MindNode has also created own set of clip arts and tinted stickers which will automatically adapt to the color of the node. The new tool MyMindNode allows you to view your documents directly on the web. It supports folding and unfolding of nodes and displaying attached notes. You can even embed documents directly into other websites. So MindNode becomes more functional than MindJet MindManager NovaMind Software released NovaMind 5 for Mac, which has been rebuilt from the ground up with many innovative new features that no one else on this platform offers. This new version represents the most significant upgrade to NovaMind for Mac in its history. It enables with a number of design support systems that operate quietly in the background as you build and edit your mind map. NovaMind has redesigned everything about topics, too, in version 5 to give you another level of freedom in customizing the look of your mind maps. Besides, it now enables you to synchronize checkboxes in your mind map with to-do items in iCal and tasks with events in iCal. There are three editions of NovaMind: Express, Pro, and Platinum, designed to suit the needs of customers from individuals and schools, through small and medium sized business right up to large businesses. So we may assume that NovaMind becomes more Apple-friendly in comparison to OmniGraffle NovaMind has packed the newest version of its flagship mind mapping software for Windows with a bevy of features that should make it very attractive to business users. This new release incorporates dozens of productivity-enhancing features, including a slick new “ribbon” toolbar that resembles the one used in Microsoft’s New Office 2007 applications. The new Brainstorming mode allows to quickly enter a large number of ideas into your map, without the program getting in the way. You can move and reshape your map branches with a great deal of creative freedom and use Ctrl-arrow keys to make fine adjustments to the position of individual branches. A unique “snap lines” feature helps you to vertically align branches to each other. Also NovaMind for Windows now allows you to create a list of resources (people, facilities, supplies, etc.) and then assign them to individual map branches. Thereby NovaMind is now more business-ready if compared vs iMindMap