Microsoft Project is a project management software program developed and sold by Microsoft which is designed to assist project managers in developing plans, assigning resources to tasks, tracking progress, managing budgets and analyzing workloads. The application creates critical path schedules, and critical chain and event chain methodology third-party add-ons are also available. Schedules can be resource leveled, and chains are visualized in a Gantt chart.
8
Primavera 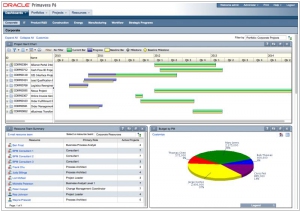 Market-leading solutions for managing capital projects and programs, IT PPM, process improvement. Primavera focuses on solutions that go beyond facilitating on-time and within budget and scope projects, to support business outcomes that drive C-level strategic metrics and results.
Microsoft Project vs Primavera in our news: Besides, instead of rudimentary web-client Project Web Access there will be full-functional web-interface with ribbon menu (in Office 2007 style). Microsoft developers promise that it will be as easy-to-use as Word or Excel. They also boast of the new project view that can replace Gantt Chart in the future. It's called Timeline View (it's shown above the Gantt Chart on the screenshot).

The public beta of Project 2010 will be available closer to the end of the year. And the official release is planned for the first quarter of 2010 when the whole Office 2010 suite will appear.