With intelligent business applications across CRM and ERP, Microsoft Dynamics 365 gives you choice. Start with just what you need to run your business—and delight your customers. And then add apps as your needs change.
14
Oracle ERP 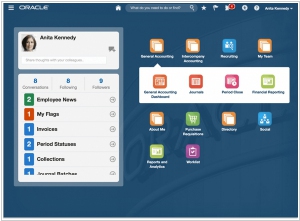 Oracle Enterprise Resource Planning (ERP) Cloud is a suite of cloud applications for finance, project management, procurement, risk management, and other core day-to-day activities important in every business, regardless of size, industry, or geography. Designed from the ground-up with a modern architecture and technology, Oracle ERP Cloud is natively connected with all Oracle enterprise cloud applications and scales inherently to support added users, transactions, and sites as your business grows by size and into new markets across your country or the globe.
Microsoft Dynamics 365 vs Oracle ERP in our news:
2021. Microsoft announces new tools to modernize supply chain and manufacturing Oracle has refreshed its ERP solution E-Business Suite to provide more integration with the company's cloud services. It also made it more tablet friendly. The Financials portion has been integrated with Oracle Revenue Management Cloud to let users leverage the revenue compliance and recognition benefits of that product. Enhancements in Project Contracts and Project Billing lets U.S. federal contractors improve cash flow, increase transparency and automate billing. Purchasing has been improved with changes that provide more buyer productivity in dealing with large orders. The changes include Web ADI-enabled spreadsheet creation, as well as modifications to purchase order lines, schedules and distributions. Web ADI, or Applications Desktop Integrator, is Oracle's tool for connecting its applications with Microsoft Excel.