With intelligent business applications across CRM and ERP, Microsoft Dynamics 365 gives you choice. Start with just what you need to run your business—and delight your customers. And then add apps as your needs change.
16
Odoo 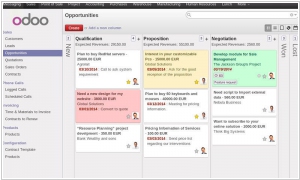 Formerly OpenERP. All-in-one management software. Beautiful. Easy-to-use. From ERP to CRM, eCommerce and CMS. Download Odoo or use it in the cloud. Grow Your Business.
Microsoft Dynamics 365 vs Odoo in our news:
2020. Microsoft introduced its customer data platform inside Dynamics 365 Microsoft announced new capabilities in marketing, customer care and social listening for Dynamics CRM. This new releases are integrated with Microsoft Office 365, Yammer, Lync, Skype, SharePoint and Power BI for Office 365.  Microsoft Social Listening includes the ability to tap into social conversations to get real-time feedback on brand, products, competitors, campaigns and issues that might be relevant to business. How does Microsoft's play into marketing compare with some other big fish? To position itself, Microsoft acquired MarketingPilot in October 2012. Last year, Oracle bought Responsys, Salesforce acquired ExactTarget and Adobe's big get was Neolane.