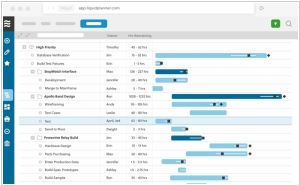 LiquidPlanner is online project management tool you need to organize hundreds of projects and thousands of tasks with ease. Simple building blocks enable you to set up a workspace that reflects your organization's style and process. Work in traditional waterfall fashion, contemporary agile methodologies, or just run a lean ad-hoc process. LiquidPlanner can handle it all.
16
Microsoft Project

Microsoft Project is a project management software program developed and sold by Microsoft which is designed to assist project managers in developing plans, assigning resources to tasks, tracking progress, managing budgets and analyzing workloads. The application creates critical path schedules, and critical chain and event chain methodology third-party add-ons are also available. Schedules can be resource leveled, and chains are visualized in a Gantt chart.
LiquidPlanner vs Microsoft Project in our news:
2019. Microsoft Project becomes user-friendly