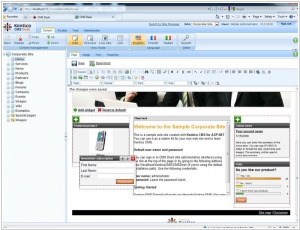 Kentico is the only fully integrated ASP.NET CMS, E-commerce, and Online Marketing platform that allows you to create cutting-edge websites, and fully optimize your digital customers’ experiences across multiple channels. Kentico saves you time and resources so you can accomplish more.
45
WordPress

WordPress is web software you can use to create a beautiful website or blog. We like to say that WordPress is both free and priceless at the same time. The core software is built by hundreds of community volunteers, and when you’re ready for more there are thousands of plugins and themes available to transform your site into almost anything you can imagine.
Kentico CMS vs WordPress in our news:
2021. Automattic acquires analytics company Parse.ly Kentico, the web content management and digital experience platform provider, released the Kentico Cloud, an "API-first," multi-tenant SaaS offering.  Kentico Cloud is comprised of three parts: Kentico Draft for authoring, Kentico Deliver for content delivery via an API and Kentico Engage for marketing and experience optimization.  The components can be licensed separately or as a bundle, and the rather aggressive pricing is tiered based on use. It starts with a free version for micro clients or experimentation, which does not require a credit card to access.