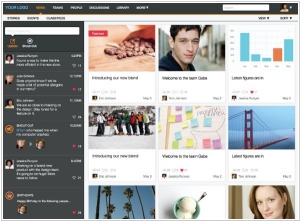 Jostle’s cloud-based intranet helps leaders align their organization and enable employees. Clarify your teams, initiatives and values. Share your news. Recognize your successes. Make sure each employee has the help and information they need to get work done. Easy to implement with a proven engagement plan. Deploy in a week without consuming IT resources.
14
Yammer

Yammer is revolutionizing internal corporate communications by bringing together all of a company’s employees inside a private and secure enterprise social network. Although Yammer is as easy to use as alternative consumer products like Facebook or Twitter, it is enterprise-class software built from the ground up to drive business objectives.
Jostle vs Yammer in our news:
2017. Microsoft retires Yammer as stand-alone service Intranet platform developer Jostle raised $2 million to accelerate customer acquisition and continue product development. Jostle wants to put a fresh face on intranet portal software. The service aims to make it easier for companies to publish news stories and announcements, host online discussions and share other relevant information like team directories. The highly visual service also features a Yammer-like chat tool. Jostle integrates with the likes of Active Directory and other directory services to make onboarding easy. It also supports most popular single sign-on solutions and offers Google Apps integration, too, with support for Google Docs, Gmail, Google Contacts and Drive. Pricing for Jostle accounts starts at $6 per employee per month for small companies with up to 100 employees, with price drops available for larger businesses.