JIRA provides issue tracking and project tracking for software development teams to improve code quality and the speed of development. Combining a clean, fast interface for capturing and organising issues with customisable workflows, OpenSocial dashboards and a pluggable integration framework, JIRA is the perfect fit at the centre of your development team.
4
Zoho Sprints 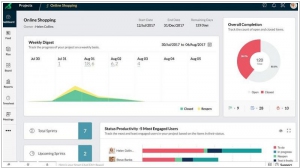 Planning and Tracking for Agile Teams. Deliver the right products on time, and always stay ready for change.
JIRA vs Zoho Sprints in our news:

Zoho has quite popular project management service - Zoho Projects. But it decided to launch another one focused on agile methodology - Zoho Sprints. It's designed to let users stay open to change at any stage of the project life cycle using the Scrum process. The aim is to eliminate the complexity and clutter that clunky UI and heavy processes bring to agile. A Sprints project starts in the backlog, which is essentially your to-do list. Once your tasks are lined up, you can arrange this list according to priority, and add the highest priority items to the backlog any time you need. A sprint cycle is typically 2-4 weeks of activity, at the end of which you’ll have something to show. The paid plan starts at $20 per month for up to 20 users, for as many projects as you want.