JIRA provides issue tracking and project tracking for software development teams to improve code quality and the speed of development. Combining a clean, fast interface for capturing and organising issues with customisable workflows, OpenSocial dashboards and a pluggable integration framework, JIRA is the perfect fit at the centre of your development team.
9
OTRS 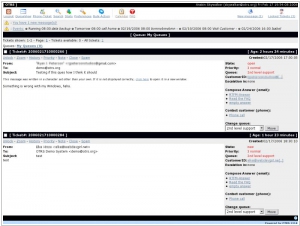 OTRS is a free and open-source trouble ticket system software package that a company, organization, or other entity can use to assign tickets to incoming queries and track further communications about them. Like alternative solutions it is a means of managing incoming inquiries, complaints, support requests, defect reports, and other communications.
JIRA vs OTRS in our news: Many companies use OTRS as a helpdesk-system for two reasons: it is free and is perfect for integration with web site and email. Now, OTRS can be also adopted by sysadmins and IT departments (even in large companies) - the new version OTRS ITSM 2.0 has been officially certified by expert company PinkVERIFY of compatibility with six ITIL v3 processes. As you know, ITIL - is the library of recommendations and best practices for managing IT infrastructure. OTRS ITSM has been around for about 3 years. Until today, it featured incident management, problem management, configuration management, SLA management and knowledge management. Version 2.0 added change management to that list. Now OTRS ITSM allows you to control such processes as setting up new employee with a laptop, implementing new systems and equipment, upgrading licensed software.