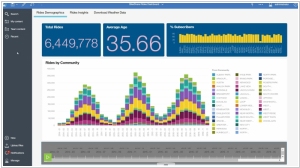 From business intelligence to financial performance and strategy management to analytics applications, Cognos software can provide what your organization needs to become top-performing and analytics-driven. With products for the individual, workgroup, department, midsize business and large enterprise, Cognos software is designed to help everyone in your organization make the decisions that achieve better business outcomes—for now and in the future.
4
Watson Analytics

IBM Watson Analytics helps you find and improve data sets with the touch of a button. You can get to work quickly instead of spending precious time cleaning up and preparing your data.
IBM Cognos vs Watson Analytics in our news: IBM is opening freemium analytics service Watson Analytics to all business users. The very limited beta of this service was launched in September. It lets business users send natural language questions and raw data sets into the cloud for Watson to crunch and visualize. Users are able to access the new service from any device, including mobile ones. It will also connect to a Watson Analytics Community, where users can exchange ideas on best practices and solicit technical support. This is the latest step on the road to actualizing Watson's potential for business users. It follows the Twitter partnership IBM signed in October, which involves using Watson to analyze Twitter data to discover insights, predict outcomes, visualize results, create reports and dashboards and explain results in familiar business terms. Untill now the artificial intelligence supercomputer IBM Watson was mainly used in scientific projects, but from November - it will become available for any business - as a cloud service Watson Analytics. This is potentially an ideal tool for executives. It works on computer or mobile devices and can respond to your questions asked in natural language. For example, you can ask: "Which customers bring us the biggest profit", "what marketings campaign bring more leads", "what leads are most likely to become customers," "which employees may leave the company", etc. In response, the supercomputer will show a list or build a beautiful chart. Of course, before asking questions, you need to load data arrays to the service. Or you can connect it to other business applications, such as Salesforce, Box, Google Docs, Oracle.