HubSpot offers a full stack of software for marketing, sales, and customer service, with a completely free CRM at its core. They’re powerful alone — but even better when used together.
22
Pipedrive 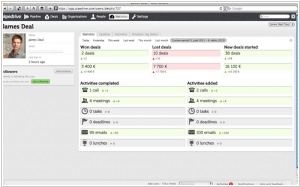 Sales pipeline software that gets you organized. Helps you focus on the right deals, so easy to use that salespeople just love it. Great for small teams. A simple and visual sales pipeline tool that teams love to use
HubSpot vs Pipedrive in our news:
2020. Sales CRM Pipedrive becomes unicorn