HubSpot offers a full stack of software for marketing, sales, and customer service, with a completely free CRM at its core. They’re powerful alone — but even better when used together.
3
KISSmetrics 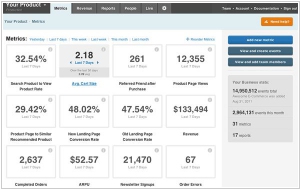 KISSmetrics takes all the data you’re collecting and ties it to real people. Every last piece gets connected to a real person. All of it. It doesn’t matter if people bounce around between different browsers and devices. Or even if it takes them 6 months to come back. You’ll see what real people do. You get all the reports that you’ve come to expect from analytics. Funnels, cohorts, revenue, metrics, it’s all there. You’ll also get the one thing you won’t be able to live without: people.
HubSpot vs KISSmetrics in our news:
2020. HubSpot’s new end-to-end sales hub aims to simplify CRM for mid-market customers