HubSpot is the world’s leading inbound marketing and sales platform. Over 10,000 customers in 65 countries use HubSpot’s award-winning software, services, and support to create an inbound experience that will attract, engage, and delight customers.
19
Intercom 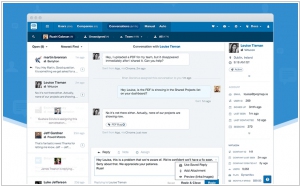 Customer messaging platform which allows businesses to communicate with prospective and existing customers within their app, on their website, through social media, or via email.
HubSpot vs Intercom in our news: