The Apache Hadoop software library is a framework that allows for the distributed processing of large data sets across clusters of computers using simple programming models. It is designed to scale up from single servers to thousands of machines, each offering local computation and storage. Rather than rely on hardware to deliver high-availability, the library itself is designed to detect and handle failures at the application layer, so delivering a highly-available service on top of a cluster of computers, each of which may be prone to failures.
6
MapR 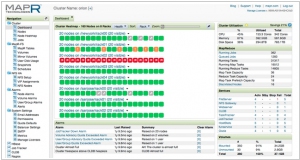 The MapR Distribution for Apache Hadoop provides organizations with an enterprise-grade distributed data platform to reliably store and process big data. MapR packages a broad set of Apache open source ecosystem projects enabling batch, interactive, or real-time applications. The data platform and the projects are all tied together through an advanced management console to monitor and manage the entire system.
Hadoop vs MapR in our news: HP announced Vertica for SQL on Hadoop. Vertica is an analytics platform that enables customers to access and explore data residing in any of the three primary Hadoop distros — Hortonworks, MapR, Cloudera — or any combination thereof. Large companies are often using all three kinds of Hadoop because they don’t know which will be dominant. HP is one of the first big vendors to say “any flavor of Hadoop will do” by taking action, though it has invested $50 million in Hortonworks which is, at present, the flavor of Hadoop inside HAVEn, its analytics stack. HP’s announcement centers not only around its interoperability, but also its power on data stored in a data lake, enterprise data hub, whatever you want to call it. HP now provides a seamless way to explore and exploit value in data that’s stored on the Hadoop Distributed File System (HDFS). The power, speed, and scalability of HP Vertica with the ease with which Hadoop lassos big data might persuade reticent managers to come out from underneath their desks and take big data on.