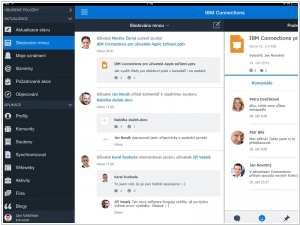 HCL Connections (formerly IBM Connections) is social software for business that lets you access everyone in your professional network, including your colleagues, customers, and partners.
13
Jive

Jive’s enterprise social networking platform allows you to engage employees, customers, and the social web. Increase the efficiency of internal communication, build brand loyalty, and monitor customer chatter and ideas, all from one central location. Say good bye to your intranet, multiple logins for scattered enterprise apps, and being out of the loop; the Jive Engage platform integrates the social networking tools you love and need so you can focus on what matters.
HCL Connections vs Jive in our news:
2017. Collaboration software company Jive acquired by Aurea IBM's SaaS collaboration services under the LotusLive umbrella received a lot of good reviews and always presented in the analyst top product lists. Nevertheless they haven't been very successful in sales (compared to the competitors). "What's the problem?" - IBMers tried to figure out - "Maybe the problem in the name? Or in marketing?". And they decided to copy the model of Salesforce and to see what will happen. They decided to remove the word "Lotus", which many people associate with the heavy software from the past. And instead, wherever it's possible, they put the words "Cloud" and especially "Social". In result, LotusLive becomes SmartCloud for Social Business. In its description you'll find such words as Social, Social and Social. And on the US television the new SmartCloud cartoon commercial (reminding Salesforce Chatter ads) has appeared (watch the video).