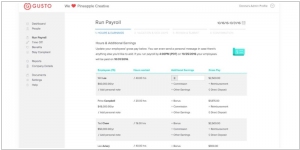 Gusto’s people platform helps businesses like yours onboard, pay, insure, and support your hardworking team. Payroll, benefits, and more.
14
Zenefits 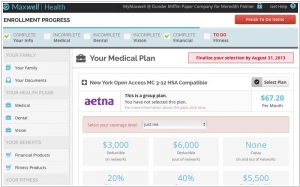 Benefits. Payroll. HR. All online, all in one place—free. Already have payroll or benefits? Connect them with Zenefits in seconds. Need benefits or payroll? We'll give you quotes and set you up. You and your employees get free access to our in-house insurance, payroll, and HR specialists. Call or email any time. No problem is too big, no question is too small.
Gusto vs Zenefits in our news: HR management service Zenefits launched a new performance tracking tool for employees, which has been built in-house as it looks to pick off niches on its effort to become a one-stop shop for HR in small businesses. That includes reviews, goals, and will eventually also incorporate check-ins and peer reviews. At smaller companies, these may often seem to be oversights or afterthoughts, but Zenefits seems to want to streamline the process and introduce these kinds of sophisticated corporate behaviors into smaller businesses. The conclusion is that Zenefits gets more focused on small business than TriNet HRM service Zenefits adds new tools for HR managers to ensure that employees are getting their documents in and they are compliant with regulations. The first new tool is a way for HR managers and employers to keep ahead of compliance requirements for their employees. For example, that might be flagging when an employee hasn’t submitted their required paperwork after accepting a job. This gives managers an overview of all the employees it needs to get in check in order to ensure that they are compliant with all regulations. The second is a documents-management application that gives HR managers a way to track all the documents that employees have to submit for their employers. The goal there isn’t to just offer file storage like a Box or a Dropbox. Zenefits’ documents app instead focuses on the metadata of those documents and tries to ensure that everything is signed and in a file somewhere. HR managers can upload documents on their own or request (or bug) employees to get their documents in on time. Online HR service that provides a single place to manage payroll, benefits, compliance, - Zenefits is launching its second version - Z2. The second incarnation of Zenefits isn’t just designed to be a home base for company data, but also a service that other companies can tap into in order to use that data for their own tools. Zenefits today is opening itself up to third-party developers, which can treat Zenefits as a permanent record for employee data — like some services treat Facebook for user data — and build their services around that.

Cloud-based HR service Zenefits has launched its own payroll system (after paycheck services giant ADP cut the company off earlier this year). Zenefits also partnered with another service - ZenPayroll, but it switched its moniker to Gusto in September and rolled out a bunch of free HR services that looked very similar to Zenefits. The new Zenefits payroll system runs in two modes. One is free, fully automated service integrating automatic payments with any updates and changes to employee deductions for health, retirement, and other benefits. There’s also a pro mode for those who like to tinker a bit on the backend. Zenefits Payroll Pro starts at $25 per month, plus $4 per employee per month on an annual contract. The new system will also integrate with Quickbooks and Xero.

2015 - ZenPayroll rebrands as Gusto and takes on Zenefits

Payroll startup ZenPayroll changed its name to Gusto and is moving beyond payroll, into benefits such as health insurance and workers’ compensation. The addition and subsequent rivalry is a punch in the gut to cloud HR benefits company Zenefits –
which partners (for now) with the newly named Gusto to offer payroll
services to its clients. This partnership proved particularly helpful
earlier this year when payroll giant ADP shut off access to Zenefits
small business customers. Zenefits turned to then ZenPayroll for the
needed payday processing. It's interesting that Zenefits also plans to roll out a payroll service similar to the startup formerly known as ZenPayroll. In a weird twist, these cloud-based startups, once partners in offering each others services are now both planning to offer their own payroll and benefits services in one platform – in other words, Zenefits and Gusto are now competing for business.

Cloud HR service Zenefits launched two free management tools generally reserved for larger enterprises. First of them - Zenefits for Managers is a tool that will allow managers within an organization to make HR changes on their end rather than waiting for HR or CEO approval. These are things like adding new hires, changing job titles and bumping up salaries. Zenefits will also start providing executives with access to business intelligence reports. Called Zenefits Business Intelligence, those using the platform will have the ability to filter workforce data such as compensation, employee headcount and turnover in real-time. This product aims to help reduce inequalities and give executives in different offices some insight on how their department compares. The fastest growing SaaS comany in history, Zenefits has raised $500 million at a $4.5 billion valuation. Zenefits allows small- and medium-sized businesses to manage human resources services in a much simpler fashion. It offers its HR services dashboard to employers for free, and makes money by receiving commissions from insurers. Zenefits also said that it has signed up more than 10,000 companies in the U.S. and that it closed more business in March this year than it had in around the first year of its life. Now manages over $700 million in health insurance premiums, as well. Cloud-based payroll processing startup ZenPayroll has closed on a $60 million Series B round, led by Google Capital. ZenPayroll mainly serves the small business market that would otherwise need to process payments and direct deposits manually. It offers an easy-to-use, cloud-based interface that allows it to take on industry incumbents Paychex and ADP. While Paychex and ADP have upgraded to the cloud in recent years, allowing them to make it easier for their own customer bases to handle payroll online and through mobile platforms, ZenPayroll’s recent raise allows it to take on larger businesses currently served by Paychex and ADP.

2015 - Cloud HR startup Zenefits is one of the fastest-growing SaaS businesses ever. Beware SimplyInsured At the 33rd Annual JPMorganChase Health Care Conference today, Zenefits CEO Parker Conrad revealed that at the close of its fiscal year this month, Zenefits will surpass $20 million in annually recurring revenue after less than two years in business. That’s up from $1 million at the same time last year, which means the company grew 20x over the last 12 months. It took SaaS businesses like Workday and Salesforce about four years to reach $20 million in annual recurring revenue. The most interesting thing about those numbers is that, unlike some other enterprise SaaS companies, Zenefits doesn’t charge for use of its cloud-based HR platform. It’s only if customers choose to designate it as their insurance broker that Zenefits makes any money. Even then, it receives a commission from the insurance provider, so customers continue to enjoy use of its platform for free.