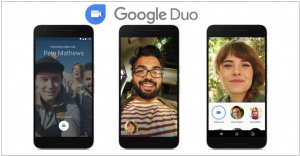 Google Duo is the new, simple video calling app that brings you face-to-face with all the people that matter most.
44
Skype

Skype is a software application that allows users to make voice and video calls and chats over the Internet. Calls to other users within the Skype service are free, while calls to both traditional landline telephones and mobile phones can be made for a fee using a debit-based user account system. Skype has also become popular for its additional features which include instant messaging, file transfer, and videoconferencing. Skype alternative for enterprise is called Skype for Business.
Google Duo vs Skype in our news:
2020. Google Duo now lets you make group video calls on the web, just like Google Meet Google's video chat app Google Duo got new features this week. Duo is the one that's mobile-friendly and resembles FaceTime more than Hangouts and Meet. The new features make more sense with that in mind. Google added something called "Family Mode" to Duo, in which you can draw silly little doodles on the video feed, presumably to amuse the little ones on the call. There are also AR effects you can use on one-on-one calls on Android and iOS, similar to those available on Facebook's video calls.