Google Analytics lets you measure your advertising ROI as well as track your Flash, video, and social networking sites and applications. Google Analytics shows you the full customer picture across ads and videos, websites and social tools, tablets and smartphones. That makes it easier to serve your current customers and win new ones.
2
Webtrends 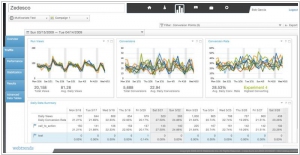 Webtrends offers a portfolio of digital solutions that help brands understand consumer behaviors and enable them to act on those insights in the very moment they need to act. Utilizing advanced big data analytics, Webtrends solutions provide a consistent customer experience across all digital channels on any device the customer uses, helping brands remain connected and relevant to their customers, increase productivity and maximize yield on investments.
Google Analytics vs Webtrends in our news:
2020. Google Analytics 4 allows to combine website and mobile app statistics