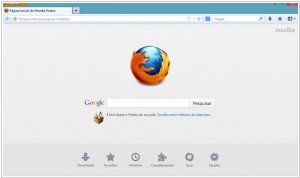 The free, non-profit browser for your desktop and mobile devices. Firefox is created by a global non-profit dedicated to putting individuals in control online. We’ve always designed Firefox to protect and respect your private information. That’s why we’re proud to be voted the Most Trusted Internet Company for Privacy.
7
Waterfox 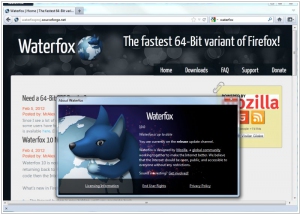 Waterfox is a high performance browser based on the Mozilla platform. Made specifically for 64-Bit systems, Waterfox has one thing in mind: speed.
Firefox vs Waterfox in our news: Usually open-source projects are flowing slowly but when business giant (such as Telefonica) is interested in it, everything is going according to the plan. As promised in the beginning of this year Telefonica and Mozilla have revealed the first smartphones based on Firefox OS. Why Telefonica helps this strange project in the world ruled by Android and iPhone? The main reason is that Firefox OS phones will be even cheaper than Android. Though Android - is also a free platform, but the Firefox OS based on using only Web-applications, can significantly reduce the hardware requirements. For example, the first two models (Keon and Peak) - are not powerful phones according to their characteristics, and they will be inexpensive, but their apps work even faster than on Android.

In addition, applications for Firefox OS can be developed by anyone who knows HTML, CSS, Javascript, so (in theory) the apps for these smartphones will be also cheaper. So on the emerging markets Firefox-phones can become a hot trend.

Will they become popular in the Enterprise? In fact, IT administrators like open systems that can be fully controlled. And perhaps, this completely open Firefox OS will be more appealing for them than the half-open Android. But everything will depend on Firefox OS security measures. Because Firefox OS app can potentially access all files, system programs and hardware of the smartphone.

In conclusion, let's recall the philosophy of the Firefox OS, and how the high performance is achieved. Unlike a regular browser (for example on Android), Firefox OS allows to save some app scripts on the device and not to download them every time from the server. You can also store some data locally. Thus, the load can be optimally distributed between client app and server so the app can run faster. Local scripts and data storage also allow apps to run offline.