Dropbox is a Web-based file hosting service that uses cloud computing to enable users to store and share files and folders with others across the Internet using file synchronization. There are both free and paid services, each with varying options. In comparison to similar services, Dropbox offers a relatively large number of user clients across a variety of desktop and mobile operating systems.
4
Streamfile 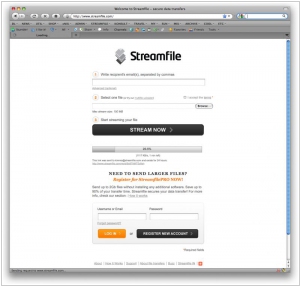 Streamfile.com allows anyone to “stream” files that are too big to email without any additional need of installed software other than a browser. Streamfile is a hosted FTP replacement solution that allows streaming functionality. By streaming, we mean that when an uploader sends a file, downloaders are able to start the download process immediately.
DropBox vs Streamfile in our news: Dropbox announced plans to partner with Google and to bring native G Suite integration to Dropbox storage. The fact is that more than 50 percent of Dropbox users have a G Suite account — which includes GMail along with Google Drive, Docs, Sheets and Slides. To this point, there hasn’t been a way to store these files in Dropbox. That has required a Google Drive account, but customer requirements can sometimes make for strange bedfellows and Dropbox and Google have been working together to bring this integration to fruition because it’s something both companies’ customers have been asking for. The integration will be completed by the end of the year. When it’s done users should be able store, open and start G Suite documents in Dropbox.