draw.io is a free online diagram drawing application for workflow, BPM, org charts, UML, ER, network diagrams. Draw.io is an online image editor that provides its user fast, easy and free way to create simple diagrams without the need to install anything on their computer. Everything that Draw.io offers can be quickly accessed via your web browser.
17
Microsoft Visio 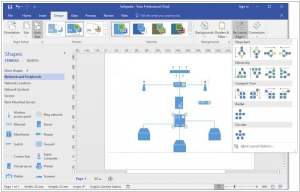 Create professional diagrams to simplify complex information with updated shapes, collaboration tools and data-linked diagrams. Simplify complex information with professional diagrams you can create in just a few clicks. Visio makes diagramming simple - whether you want to quickly capture a flowchart that you brainstormed on a whiteboard, map an IT network, build an organizational chart, document a business process, or draw a floor plan.
Draw.io vs Microsoft Visio in our news: Many different company departments and professionals work with data that is or can be represented in a table or spreadsheet format, and often, that data is more quickly understood when converted into a diagram. If you want to see that data visually, it’s now easy to import it into draw.io. Each row represents a shape, and the columns contain the shapes’ data. You can see that not all columns are included as data in the diagram – some of these columns tell draw.io how to format the shape, or are used as identifiers for drawing connectors between the shapes. You can set the formatting for the shapes. It’s now much easier to keep related draw.io diagrams with Trello tasks – embed one or more  diagrams into any Trello card instead of using a shared folder or cloud file service, or worse, bouncing the diagrams around via email. You’ll be able to collaborate with your team much more effectively and efficiently. draw.io lets you create a wide range of diagrams: flowcharts and BPMN diagrams, mockups and wireframes, UML and ER diagrams, floor plans and electrical circuits, infographics and many more. It has an extensive shape library, robust tools for importing diagrams in other formats, and stores all data within Trello.