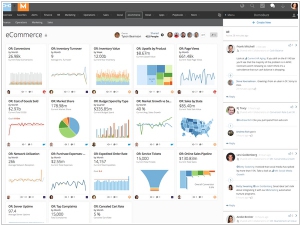 The Domo Business Cloud lets you integrate data from any source, turn data into live visualizations, and extend BI into apps that empower your team with data.
26
Tableau

Tableau complements your natural ability to understand data visually. Our breakthrough products let you create rich analyses and share your insights with colleagues in seconds. Connect and visualize your data in minutes. Tableau is 10 to 100x faster than existing solutions. From spreadsheets to databases to Hadoop to cloud services, explore any data with Tableau.
Domo vs Tableau in our news:
2019. Salesforce acquires data visualization company Tableau for $15.7B