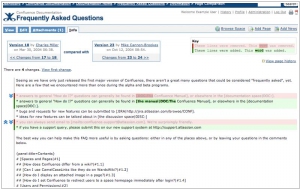 Confluence, Atlassian’s content-centric collaboration tool for teams, is making it easier for new users to get started with the launch of an updated template gallery and 75 new templates. The update goes to show that Confluence has evolved from a niche wiki for technical documentation teams to a tool that is often used across organizations today. The new template gallery will make it easier to find the specific template that makes sense for your business, with new search tools, filters and previews that you can find in the right-hand panel of your Confluence site.