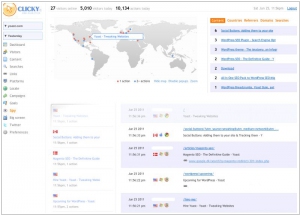 Clicky Web Analytics enables bloggers and small websites to get insights and live information about their online visitors. Clicky lets you see every visitor and every action they take on your web site, with the option to attach custom data to visitors, such as usernames or email addresses. Analyze each visitor individually and see their full history.
16
Mixpanel

Any question you can ask about your data, Mixpanel can answer. There are many metrics that measure engagement; page views are not one of them. Make your product better by measuring actions, not page views. Mixpanel's power lies in giving you the ability to learn more from your data by being able to ask increasingly important and complex questions. Most analytics products limit insights to basic trend lines, showing for example "number of homepage visits" over time. Mixpanel goes further by enabling you to ask more of your data.
Clicky vs Mixpanel in our news:
2015. Mixpanel introduced codeless mobile analytics