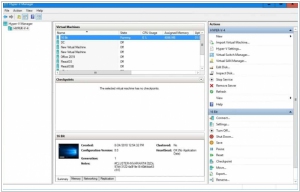 Microsoft Hyper-V provides enterprise-class virtualization for your datacenter and hybrid cloud. Bolster IT efficiency and flexibility with the faster application deployment and maintenance that Microsoft virtualization solutions deliver. Reduce costs by consolidating more workloads on fewer servers and increase agility using the same virtualization platform on-premises and in the cloud.
Citrix Hypervisor vs Microsoft Hyper-V in our news:
2020. Microsoft makes it easier to get started with Windows Virtual Desktops Virtualization giant Citrix purchased Sanbolic, a company that provides virtual storage optimization services, filling in a missing piece in its virtualization product portfolio with the acquisition. Sanbolic plays nicely with Citrix desktop virtualization technology and considered Citrix a strong partner before the agreement, so the deal makes sense in that context. Sanbolic brings a unique set of capabilities to Citrix including the ability to create software-defined pools of storage and distribute the storage in the most efficient manner across a network, even in cases where the nodes are widely geographically disbursed.