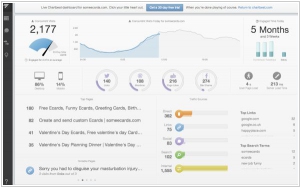 Chartbeat provides real-time analytics for publishers and media content creators. Get live real-time data about your website performance. Whether it's incorporating loyalty insights into your morning meetings or relying on one-glance homepage stats, fire up your strategy with data designed specifically for media sites.
16
Mixpanel

Any question you can ask about your data, Mixpanel can answer. There are many metrics that measure engagement; page views are not one of them. Make your product better by measuring actions, not page views. Mixpanel's power lies in giving you the ability to learn more from your data by being able to ask increasingly important and complex questions. Most analytics products limit insights to basic trend lines, showing for example "number of homepage visits" over time. Mixpanel goes further by enabling you to ask more of your data.
Chartbeat vs Mixpanel in our news:
2015. Mixpanel introduced codeless mobile analytics Real-Time web analytics service Chartbeat is making public all of the metrics, standards and methods of measurement it uses internally — including a detailed breakdown of their weaknesses and limitations. Chartbeat CEO Tony Haile says the web-measurement and analytics market is still too full of black-box style tricks and smoke and mirrors, so he is making his company’s entire measurement process and methods public in the hope that others will do likewise. Historically, measurement and analytics companies have kept their methods to themselves as much as possible, and so have the media and publishing companies that make up most of their clients.