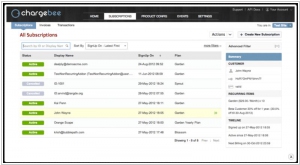 Stripe builds the most powerful and flexible tools for internet commerce. Whether you’re creating a subscription service, an on-demand marketplace, an e-commerce store, or a crowdfunding platform, Stripe’s meticulously designed APIs and unmatched functionality help you create the best possible product for your users.
ChargeBee vs Stripe in our news: ChargeBee, a startup that helps companies manage their billing and subscription needs, has closed a $5 million Series B round. ChargeBee is focused on helping startups, and particularly those in the SaaS space, get more from their billing subscriptions. It counts Freshdesk, Kissflow, Soylent and VinylMePlease among its customer base. ChargeBee is rivaled by Zuora (which today raised $115 million), Recurly and Chargify. It provides both technical support and solutions, alongside consultancy-like services. The latter might include advice on necessary billing and payment-related processes for expanding into new markets, for example.