Recruiting software for small teams doing big things. A uniquely simple, visual recruiting tool you and your team will love. Effortless candidate management with our drag & drop interface. Collaborate with your team and candidates in real-time.
7
JazzHR 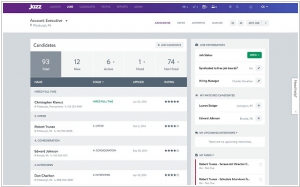 JazzHR is software that bridges the gap between recruiting and performance to create a whole new thing. Easily post unlimited jobs to popular job boards. Create a branded job board for your company. Quickly screen incoming resumes on any device
Breezy HR vs JazzHR in our news:
2015. Recruiting service Resumator rebrands as Jazz Recruiting service Resumator launched back in 2009 and was first focused on getting the word about an open position out and managing the incoming resumes. Over time, however, it has grown into fully-featured recruiting platform. So the company has decided that it’s time to reflect this change in its name and it’s now going by the name of Jazz. Over time, Resumator put the focus more on who to hire, using a data-driven model, and that’s what Jazz now also centers around. Using this model, the hiring company first creates a profile of its ideal candidate that looks at basic aptitude for the job, but also at soft skills like cultural fit and work style. Then, throughout the hiring process, interviewers assess candidates based on this profile. Jazz will offer its service in three tiers. Using the most basic — and, at $149/month, cheapest — tier, businesses can use the tool to put their jobs online, just like with the earliest versions of Resumator. Businesses that opt for the second tier ($299/month) then also get some of the tools that helps them how to hire and those using tier three get all of the features described above. Breezy HR released a new iPhone app along with a video-calling feature for its core recruiting product. Breezy’s iPhone app matters to the service, because mobile is an important part of the recruiting lifecycle, and that the application will provide hiring teams and candidates a real-time touch point for their most common and time expensive tasks. The company’s addition of video chatting to its core service matters because face-to-face connections are key to help determine soft skills and culture fit. Breezy is currently focused on small and midsize companies that have between 50 and 300 employees and has oodles of competition, large and small, both selling products directly competing with its recruitment tool, and in related hiring areas.