Some of the fastest growing companies in the world rely on us to process mobile and web payments. Elegant code. Drop-in checkout. Secure, client-side integration. Zero-hassle PayPal integration will be available soon. Mobile payment processing designed to keep the checkout flow streamlined.
14
Recurly 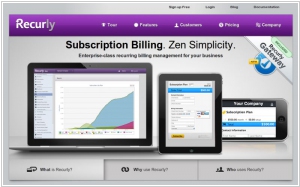 Subscription billing and recurring billing management. Recurly offers enterprise-class subscription billing for thousands of companies worldwide. Whether your company is in need of a speedy deployment or a seamless and highly customized integration, Recurly provides flexible features for custom and professional implementations.
Braintree vs Recurly in our news: