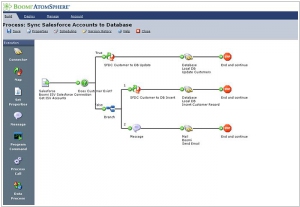 Dell Boomi allows you to connect any combination of Cloud, SaaS, or On-Premise applications with no appliances, no software, and no coding. With Boomi you will achieve unprecedented implementation speeds that are just not possible with software packages, hardware appliances, or custom coding. Using only your web browser, you can sign up, log in and then build and deploy your integrations at whatever pace you require.
13
Microsoft Power Automate