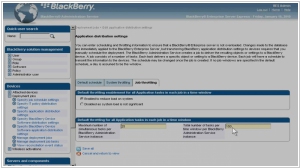 BlackBerry Enterprise Service (BES) is the only solution you need for secure device, application and content management, with integrated security and connectivity, for BlackBerry, iOS and Android. Deploy, manage and control both corporate and BYOD device users through a simple unified console.
15
MobileIron

MobileIron Platform combines traditional mobile device management (MDM) capabilities with comprehensive security, mobile application management, and mobile content management capabilities. An IT administrator can manage the lifecycle of the device and its applications, from registration to retirement, and rapidly accelerate operationalizing and scaling their Mobile IT infrastructure.
BlackBerry Enterprise Service vs MobileIron in our news:
2015. Blackberry to acquire mobile device management vendor Good Technology Smartphones and tablets have become no less important business tools than laptops and computers. And it doubled the headache of IT administrators. But the real disaster for them has become BYOD (Bring Your Own Device) - the global revolution led by employees (and most importantly, CEOs) that want to use only their own (favorite) mobile devices for business purposes. At the same time they continue to play games on their smartphones, take them to night clubs, lose them somewhere, buy new ones and bring them to office. The situation is even more complicated because of the wide variety of mobile platforms: iOS, Android, Blackberry, Windows Phone, Symbian. How to ensure security and manage enterprise mobile applications in such conditions? To reduce the suicide rate among IT admins the smart vendors invented Enterprise mobile app stores.