Asana is the shared task list for your team, where you can plan, organize & stay in sync on everything.As fast as a text editor. Plenty of keyboard shortcuts, fewer page loads and mouse clicks. Asana is one app that won't get in your way.
4
HiTask 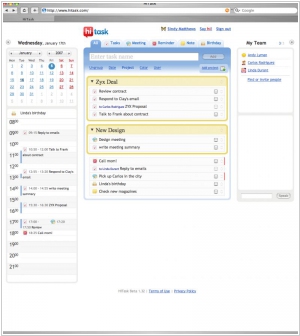 HiTask is a web based task manager and to do list tool. Using HiTask as your task manager, you can handle your to do list, manage teamwork, and use it as your personal scheduler and appointment setter.
Asana vs HiTask in our news:

hiTask has set forth with the notion of making work more fun. They do this by providing an easy-to-use task management system that aids the team as a whole. Drag-and-drop seems to be a core focus for the hiTask management system. Drag a task onto a team member’s name, or re-arrange your own task list using this same function. One of hiTask’s features is an internal chat that looks a lot like a Mac’s AIM. Initiate a chat by dragging a team member’s name onto the chat screen, and share tasks with them in the same fashion.
Tasks can be tagged and grouped by color, username, date or project title. This makes tasks searchable and easy to categorize. Calendars are easy to rearrange, and managing a list of tasks for personal or team use is simplified by hiTask’s interface as well as their drag-and-drop capabilities. By removing some of the tediousness of everyday work life, hiTask hopes to ease the stress of work, and enable team cohesion.
hiTask has incorporated a few social networking features in order to “make work more fun.” This is evident not only by the transparency they provide for team members, but in the very way hiTask looks. The aesthetics are clearly rendered for a younger demographic (bright colors, rounded corners) and would appeal to the type of team that would recognize the social aspects of hiTask and would be comfortable using this type of system for personal and team task management.
Be forewarned: hiTask is truly social! There is no way to make a task private, and sharing the iCal feed opens your schedule up for public display. And while hiTask is most similar in concept to Basecamp, there are no offerings for document or content management, or any other tools offered by the rest of the 37 Signals umbrella.