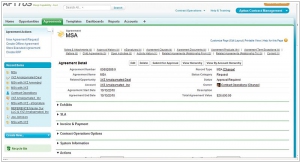 The future of business is digital. DocuSign helps businesses of all sizes easily and securely sign, send, and manage documents in the cloud, with unmatched availability and legal enforceability. Go 100% digital with DocuSign. Securely sign and manage documents online from any device with the most widely used e-signature solution
Apttus vs DocuSign in our news: Apttus, a quote-to-cash SaaS company built on top of Salesforce.com,  announced a $108 million round. Apttus software can handle quotes, contracts and revenue management. CFO Jeff Van Zanten says there are competitors who do pieces of this process, but claims none that has the breadth of services his company offers. Apttus is closely aligned with Salesforce.com, and not only because Salesforce Ventures has been a significant investor, but because Van Zanten says that the two sales teams work shoulder to shoulder inside customers. The two products are well aligned as Apttus comes into play where CRM leaves off in the customer record. As soon as you begin quoting prices, signing contracts or collecting money, Apttus takes over.