Ansible is the simplest way to automate IT. Automate in hours - not weeks - with Ansible's human-readable IT automation language. Ansible uses SSH instead of agents. More efficient, more secure and less to manage. App deployment, configuration management and orchestration - all from one system.
8
CloudBolt 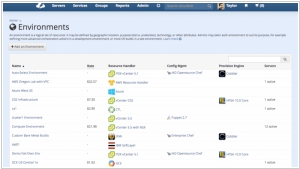 Open source giant Red Hat announced that it would buy Ansible, an IT automation solutions specialist that helps companies build and manage hybrid IT deployments across the cloud and on-premise solutions. The acquisition had been rumored to be in the works for a price of over $100-150 million. Ansible has made a name for itself as a specialist in OpenStack clouds — earlier this year it spearheaded a partnership with Cisco, HP, CSC and RackSpace in aid of this. Red Hat’s acquisition of Ansible is the company’s signal of how it hopes to expand further into OpenStack itself, as part of its wider ambitions in hybrid cloud management, OpenStack and containers.