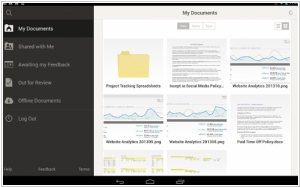 Amazon WorkDocs is a fully managed, secure enterprise storage and sharing service with strong administrative controls and feedback capabilities that improve user productivity. Users can comment on files, send them to others for feedback, and upload new versions without having to resort to emailing multiple versions of their files as attachments. Users can take advantage of these capabilities wherever they are, using the device of their choice, including PCs, Macs, and tablets.
27
Google Drive

Online file storage and syncing service working as a file system for other Google's services. Allows to sync files between all your computers and mobile devices or collaborate on files with your team and partners. Version control, OCR, powerful online viewer. Provides 5 GB free disk space.
Amazon WorkDocs vs Google Drive in our news:
2022. Google is adding new Drive, Docs, Sheets, Slides and Keep optimizations for tablets Google introduced Android 12L earlier this year to make tablets easier to use, and at I/O, the company announced plans to update more than 20 Google apps on tablets to optimize them for larger screens. Today, Google said it’s adding several new features for Drive, Docs, Sheets, Slides and Keep to get started on this promise. The most notable feature announced today is the ability to drag text or images between two Workspace apps when you have them open side-by-side. Google notes that you can now drag text or images from apps, such as Chrome or Sheets, and drop that content right into an existing document or spreadsheet cell. In Google Drive, you’ll be able to quickly upload files by dragging and dropping them into the app. You can also add links to Drive files by dragging the file into an open app like Keep. Amazon has released a dedicated mobile app that allows users to access documents saved in its Cloud Drive service. The move comes as the cloud storage market becomes increasingly crowded, dominated by players such as Google and Dropbox. The app is now available for iOS, Android and Kindle devices and lets users view all documents stored in their Amazon Cloud account and can be accessed anywhere you're logged in. It also works as a companion to the existing desktop cloud client. So now you can look at everything via the app as you would on a desktop's file browser with the Dropbox app.

Amazon Cloud Drive is expanding that service as a paid offering to cover all kinds of content, and to users outside of its loyalty program. Unlimited Cloud Storage will let users get either unlimited photo storage or “unlimited everything” — covering all kinds of media from videos and music through to PDF documents — respectively for $11.99 or $59.99 per year. The move is a clear attempt by Amazon to compete against the likes of Dropbox, Google, Microsoft and the many more in the crowded market for cloud-based storage services. It’s not the first to offer “unlimited” storage, but it looks like it’s the first to market this as a service to anyone who wants it. Amazon’s Zocalo work-collaboration tool that competes with services like Dropbox and Box gets the new feature that allows to sync files to your computer or mobile device through a shared folder. Users can set up per-project folders and share them with members of the project team on an as-needed basis. After setting up a shared folder, team members can then access those documents and each time they edit and save the file, Zocalo records those changes. The new syncing feature is optional for users and, if you want it, you’ll have to activate it in the preferences section of your Zocalo client.