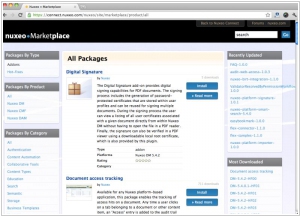 Nuxeo provides an Open Source Content Management Platform enabling architects and developers to easily build, deploy, and run content-centric business applications. In the cloud or on premise, Nuxeo's Enterprise Content Management (ECM) technology offers an integrated solution for Document Management, Case Management, Digital Asset Management and much more. Built on a modern, Java-based architecture, the Nuxeo Platform is architected for modularity and extensibility, unlike traditional ECM solutions.
Alfresco vs Nuxeo in our news: - Forums and blogs for collaboration