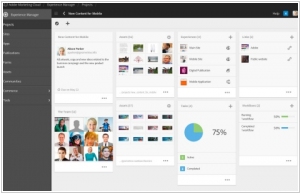 Adobe Experience Manager is now available as a cloud-native SaaS application. Prior to this, it was available on premises or as a managed service, but it wasn’t pure cloud-native. Obviously being available as a cloud service makes sense for customers, and offers all of the value you would get from any cloud service. Customers can now access all of the tools in AEM without having to worry about maintaining, managing or updating it, giving the marketing team more flexibility, agility and ongoing access to the latest updates. AEM provides a number of capabilities, including managing the customer experience in real time. Having real-time access to data means you can deliver the products, services and experiences that make sense based on what you know about the customer in any given moment.